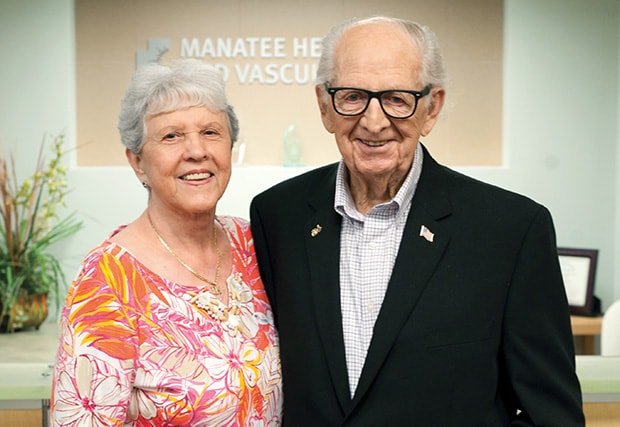 “I am so grateful for this wonderful technology!”
~ Eugene Vaadi

Retired WWII, Korean and Vietnam War veteran Eugene Vaadi, 95, was used to staying physically fit. He lifted weights, walked on the treadmill and rode the bike at his gym. When he started having shortness of breath and fatigue, he became concerned and saw his cardiologist, who discovered Eugene had severe aortic stenosis.

Eugene was referred for a series of appointments and tests to determine his best option. He met with two cardiothoracic specialists, and both said Eugene was too high-risk for open-heart surgery, but okay for TAVR. He was scheduled for the procedure on July 11, 2016.

“Mr. Vaadi’s procedure lasted about an hour and he was discharged home after two days,” says Dr. Iyengar. “He was back to doing his regular activities within a week or two. With open-heart surgery, his recovery would have been close to six months.”

Eugene says some of his friends had the TAVR procedure and they had a successful outcome as well, so he was comfortable with it. “Dr. Iyengar and the staff were very helpful and the care I received was top-notch. I am lucky to have this hospital in my community, and I recommend it and the doctors to others,” says Eugene. He has gone back to his normal fitness routine three times a week for an hour and feels great. “I am back to living life, thanks to Manatee Memorial Hospital!”

For more information or to find out if you are a candidate for TAVR, please contact Amanda Harrington, RN, BSN, Structural Heart Navigator, at 941-708-8064 or Amanda.Harrington@mmhhs.com.